Don’t “Live” In Your Crisis

Stop playing with yourself. Stop fooling yourself. Stop lying to yourself.  You owe it to yourself.  Last night was a cool night, but the humming sound of the air conditioner is a necessary lullaby to put me to sleep.  I started to shiver around midmorning so I put on my thin red jacket to avoid having to turn off the AC.  The zipper got stuck half way and between sleep and wake I tried jiggling it and applied a bit of force to zip it down as I realized a part of the jacket was caught in its zipper.  It wouldn’t go back down, so I crashed on the bed, just so. 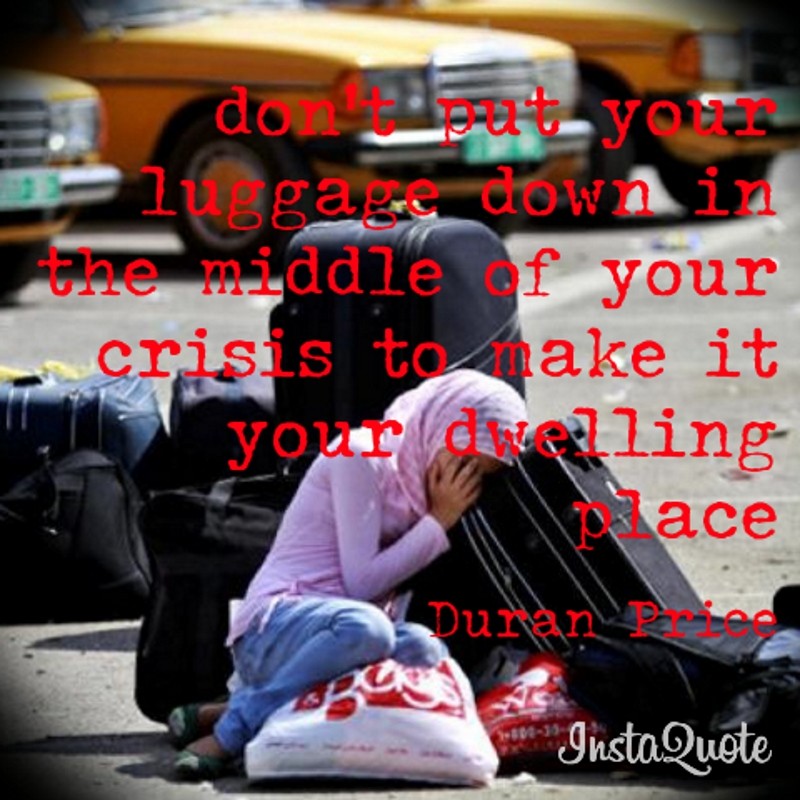 This morning when I woke I tried once again to unzip the jacket but it was still stuck and I became afraid that if I pulled it up anymore things would get worse. Then I remembered the saying if you find yourself stuck in a bad situation and you’re going through hell, keep going. So that’s what I did.  With full force I pulled the zipper upward and boom, it freed itself.  I was then able to accomplish my goal and remove the jacket freeing myself.

He abuses me but he loves me.  Stop playing with yourself.  This job isn’t what I want but it ain’t that bad. Stop fooling yourself.  I can quit this bad habit whenever I want without help. Stop lying to yourself. I’m so unhappy here but I’m so afraid to try to move forward out of this mess.  You owe it to yourself.

I know personally that life can be hard and messy, disheartening and discouraging, confusing and worrisome and all we want sometimes is relief.  But don’t you put your luggage down in the middle of your crisis to make it your dwelling place.  That is not true relief, that’s living in hell.  As oxymoronic as this advisory may seem, to get true relief that puts a lasting smile on your face, you have to stop playing with yourself.

Harmony, Overlooking Your Most Valuable Asset