If we had to pay a $100 every time we judged someone there’d be more harmony in the world.  Even as an advocate of not judging the book by its cover (Unless we’re talking about TOPIF), I find that I still judge others and form opinions of them far more than I should, and I’m often wrong. 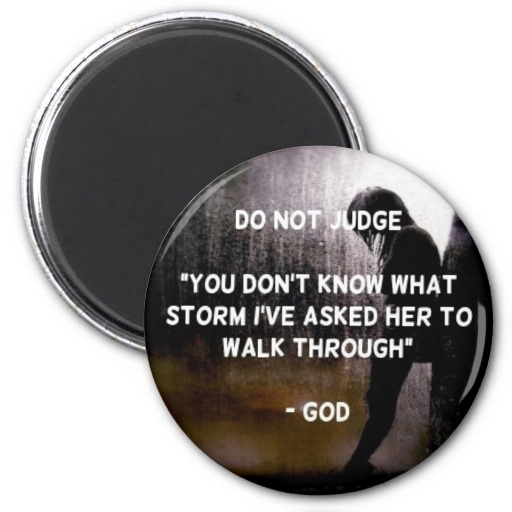 A few months ago I was going to the mall and as I was looking for a parking space I saw this vehicle’s reverse lights come on.    I was headed north and she was reversing out of a north –faced spot.  So I stopped in all my glee to give her time to reverse out and drive away to make the spot available for me.  I noticed that she was having some difficulty reversing though there was a lot of space available for her to do so.

Had to be a woman! That was my first judgment.  As I watched in dismay as she tried to reverse and went back into her spot, I thought to myself, hmm, she may think I’m closer to her vehicle than I actually am so let me reverse further freeing up even more space.  I reversed about two car lengths.  And she still struggled to get out, but finally did make it.  She had her teenage son in the back seat and someone else in the passenger seat I could not see.

As she was pulling away she stopped to roll her windows down and I pulled closer as I realized she wanted to tell me something.  “No need to be so rude!” she scoffed, which is Canadian for WTF’s your problem!  I speak Canadian.

Realizing now that she thought I was pressuring her and not letting her out, I was caught totally off guard that this is what she was thinking the whole time.  I shouted back “Oh, I’m sorry, I didn’t realize.”   Though really there was enough space to land a jumbo jet between us.   I felt really bad that this lady thought I had an attitude, didn’t seem to realize how much space she had, nor realized that in thinking about her situation I reversed even further to accommodate her.    She left angry, I left insulted, a bit hurt, and a bit angry and it was all a misunderstanding.  If judging my motives would have cost her $100 that would not have happened.

Even when someone is doing something that you consider to be unwise, inefficient, uncultured, etc, unless they are hurting others, they have every right to do what it is they are doing.  In fact they are fully licensed to do so by the same agency that fully licenses you to make your own life choices.  Judge Less.

It seems that in many instances the beginning of judgment comes in the form of annoyance.  We get annoyed when we see someone doing or saying something we don’t like.  That’s a good time watch out for the appearance of your own personal Judge Joe Brown.

“Be kind for everyone you meet is fighting a battle”

I fell in love with that quote the first time I read that, because I could relate.

It might be impossible to stop judging people and situations all together as we are creatures of habits and our judgment of situations allows us to identify danger and thus take actions of survival,  but we probably hurt people more than we help them when we judge their lives.  Since I can’t implement a new law charging everyone $100 for the right to judge others, I’ll offer an admonition instead.  If you want to live in a more harmonious world, judge less.

Want more?  Signup for my newsletter.